However it may be, I decided to sit down with the big man (in the middle of him batch cooking chicken breast for that week) to find out more about the many lives of Kwokko. Which I did. But in the process of doing so, I learnt a little more about Kwok Kah Onn himself.

It’s the closest thing to nutrition and for me, I like to know about nutrition, I would like to know how nutrients interact with the body.

Is there something specific in the industry that you’re aiming towards?

In the near future I hope I can become a dietician, and work more on clinical nutrition and disease prevention.

When and where did this interest in nutrition come about?

Before going to army, I didn’t have an understanding of nutrition. In army, I realised that nutrition plays a very big role in fitness and how our body performs. I wanted to learn more about that. Actually, in year two of NS, I switched courses from Life Science to Food Science and Technology.

When did you start gymming?

I had a lot of phases of gymming. At first, like any other person, I did bodybuilding. That was during late secondary school. Then I ventured into CrossFit, then dragon boating in JC. In army, it was purely army kind of fitness. After army, I needed another entry into gymming, because after a while, gymming gets very monotonous when you keep doing the same things in and out. Which is why I ventured into powerlifting.

So in short, that’s been about seven years. But if you consider serious training, that was just the last three years.

Bench: 135kg (stagnant for the last two and a half years)

Who do you think is the buffest person in KR? You can say yourself.

What is your diet like when you are cutting and bulking?

My protein stays very similar whether I’m bulking or cutting, I always stick to clean and complete protein sources. Complete proteins are what you’ll get from chicken and dairy, etc.

How much do you usually spend on chicken breast a month?

Honestly not a lot. I buy my packs frozen and in 1kg bags. That’s seven dollars per kilo for two bags a week, which falls just under 60 bucks a month. I think it's definitely cheaper than eating out. And my diet isn't very expensive because I don't use a lot of supplements.

What's the story behind the NDP picture on Instagram?

It was a spontaneous picture (in Primary 5) with my friend and I, and everyone said I was cute. That was the only picture that people said I was cute, so I capitalised on the moment since people called me and continue to call me cute every year. 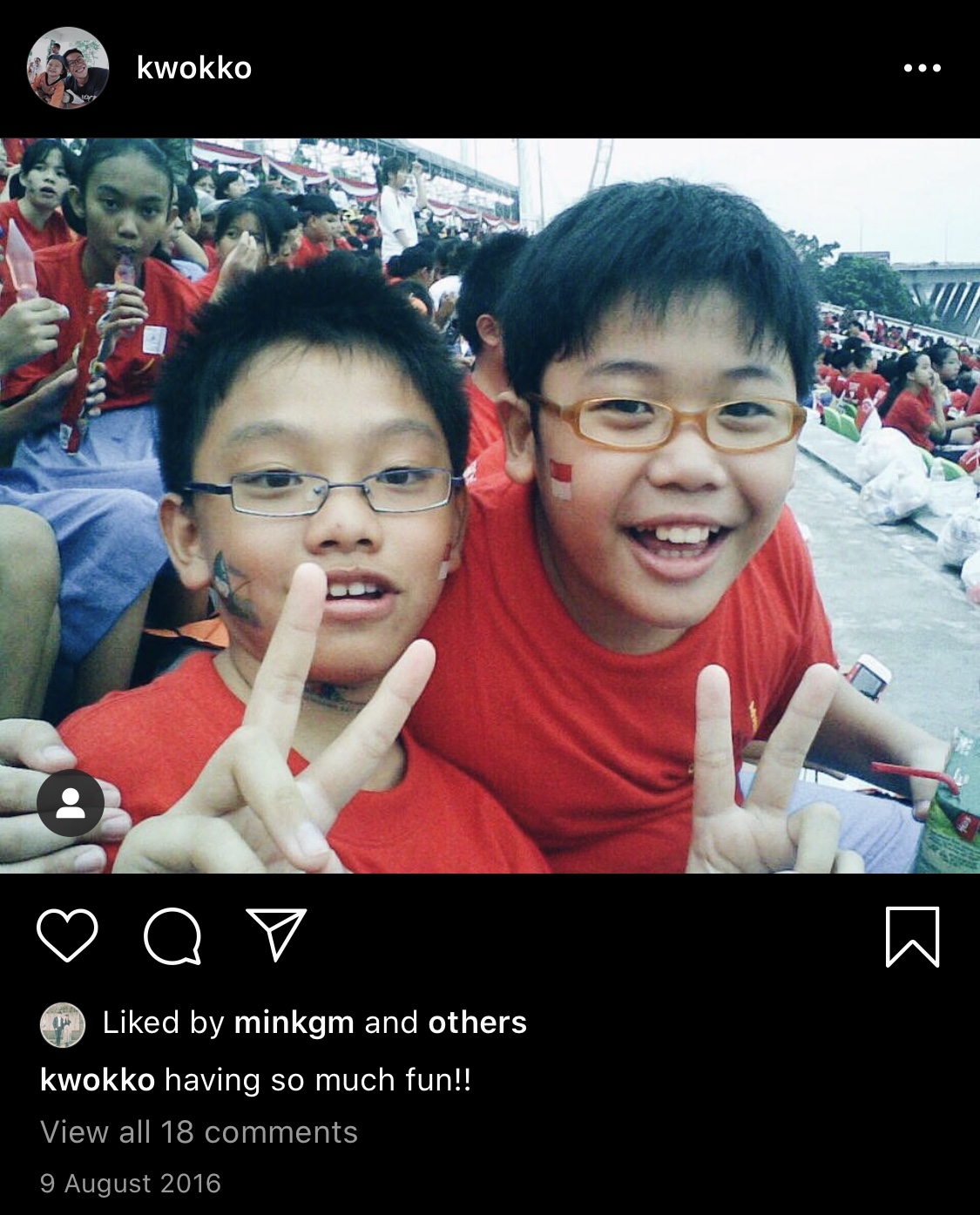 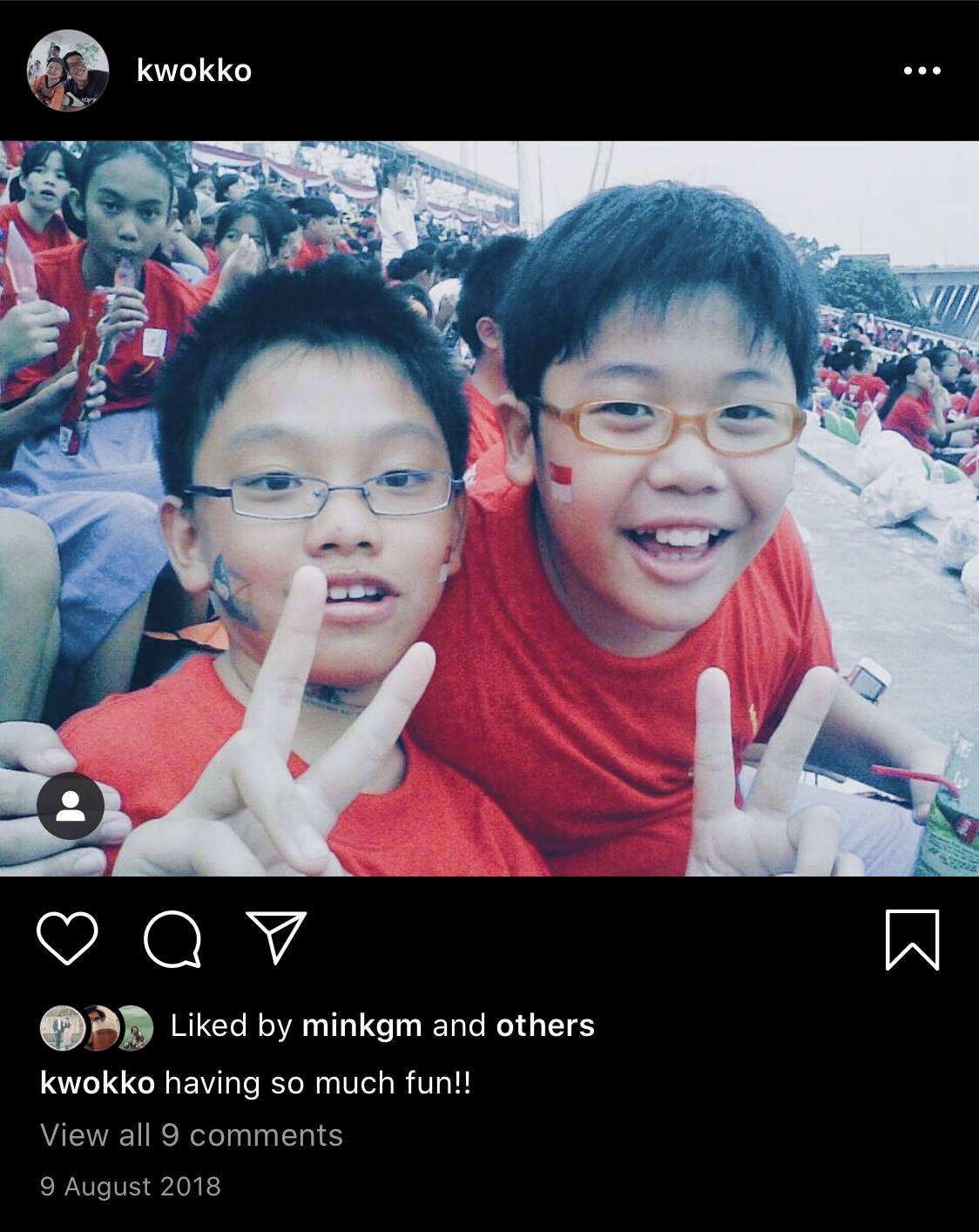 What is it that you do in the JCRC?

I help coordinate activities within Heritage Committee, FWOC, Block Head Council, and most importantly, I help Kai Yuan with whatever matter he needs help with. I also support hall admin and hall admin also supports me.

Your 40th VP(I) and Media Director

What is it like working with your cousin (Min) in JCRC?

WAH tough.. i think we started off very close as block comm members. Then now as JCRC, really too close already. We don't even communicate now, we just shout at each other but we somehow get our message across.

Ya... now we're trying to get unclose so we just send cat memes to each other every other day...

What would you say to those who are sitting on the fence and contemplating whether or not they should apply for the position?

Just go for it. I think a lot of people don’t want to go for the position because they don’t find meaning or they don’t find a clear purpose in what they want to do. But most of the time in life, whatever we do, we find purpose during the process, not at the start point. For me, I wanted to take up the role, but when I dove into it, it was during the journey where I actually found real meaning and purpose.

My advice is to just take the leap of faith if you really want the role. If you’re actually considering it, just take it. The workload is going to be tough but the stress will ultimately make you a better person, it will develop your character and soft skills. It’s all the things that school doesn’t teach you in black and white.

What are your plans for next year?

Find a job, dude. I don’t think I'm running for president that's for sure. I’m happy with where I am. I’ll still be very involved in the block, I’ll still be into powerlifting. But hall wise, I think I’m gotten to the max of I want to be and achieve. I don't really want to pursue further. It’s important in life to diversify, I think I’ve committed a lot to hall and now it's time to venture into other paths to help me grow further as a person.

Who’s the weirdest in the JCRC?

Shoot, shag or marry, the three others in your square.

What’s the story behind the tattoo?

From young, my father has always taught me the value of discipline and grit. No matter what you do, you always push through it – especially when things get difficult. That is what shows your character.

These four letters – GRIT – it has stuck with me since I was a kid. Therefore, I got it tattooed as a reminder of such values, why it is important to me and what my father has taught me.

That’s all I have.

Sick! Ok I think my chicken is burning.